#389615  by FIREM
November 8th, 2021, 11:02 am
Well a GREAT BIG THANK YOU! to all that attended the meet and spent some time at our home. The neighbors already knew a little about how "quirky" we are but really got a dose when 6 MMMMMM's showed up! One neighbor even came to party with us!! 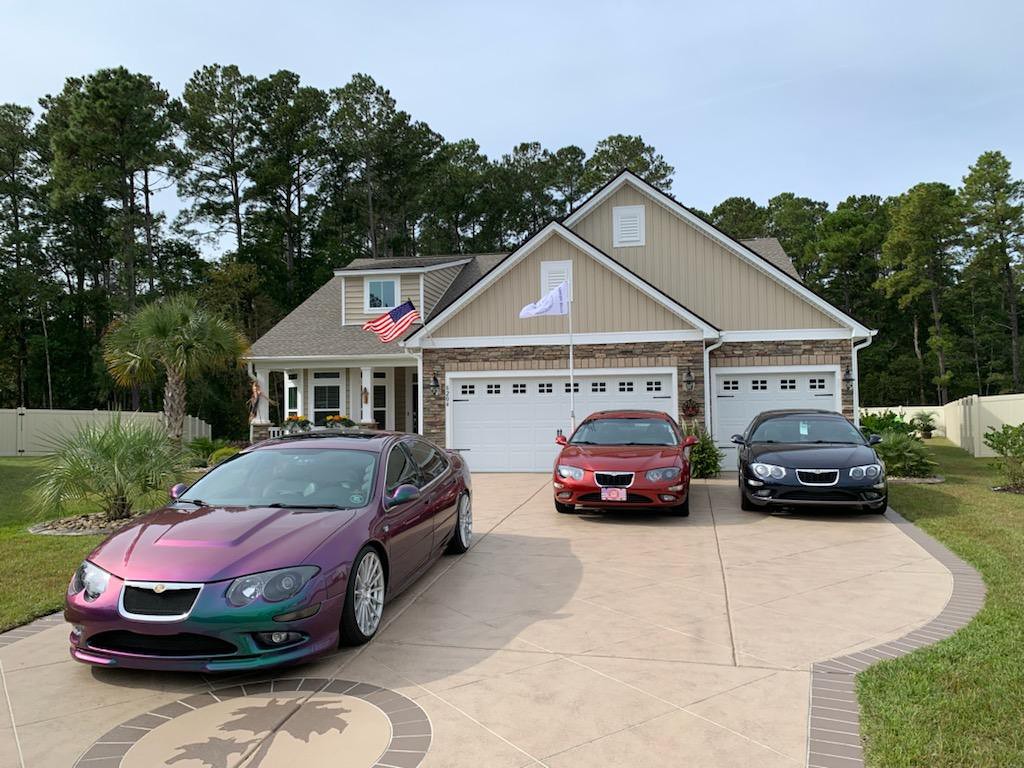 Unfortunately the weather was unusually cold and wet for this time of year, but as usual it did not dampen our "spirits"
While the Show was wet and windy, a good time was had by all (and we will let the First Lady give the results in her usual meet recap.)
Just to show you how crazy we are, borrowed some tents and brought them and some weights to the show. 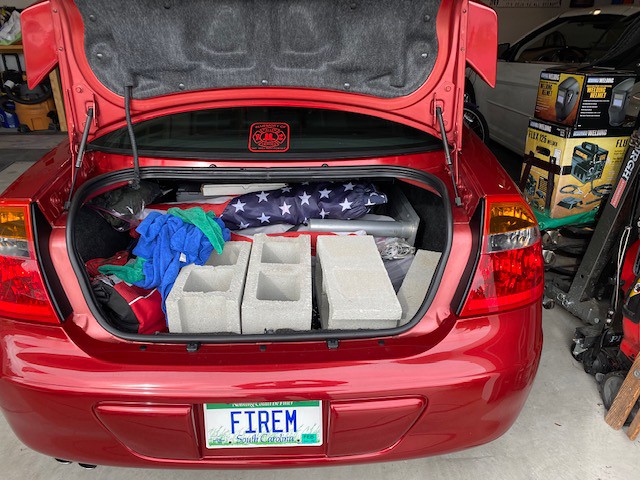 Yes those are cinder blocks in FIREM

So now it is eerily quiet in the house as the Jarvis's have gone home, Robert & Nick explore Charleston, Michael has arrived home, and the Anthony's started their journey home at about 3 AM.

Luna at the visitors center, then posing with Old Iron Sides after a carriage tour, and a restored Model A driving around town.

#389622  by First Lady
November 9th, 2021, 10:36 pm
Color me sad!!! The meets officially over for us. Robert and Nick just headed back to their hotel to start heading back home tomorrow. Living vicariously through their wonderful Charleston adventures the last two days and enjoyed fabulous dinners and casual evenings together. 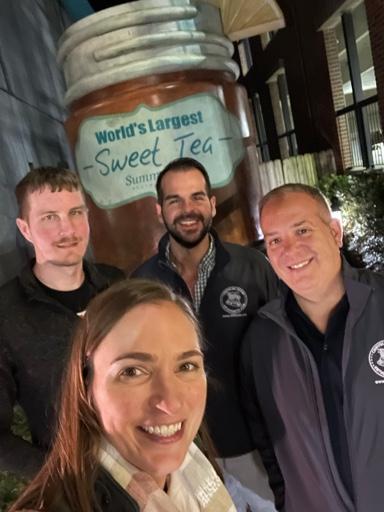 Another one for the books!!

That would be me! Assuming I continue to be complication free from my recent surgery, my 4-legged co-pilot and I will be departing CT on the morning of 12/12, breaking up the trip with a night at the historic Jefferson Hotel in Richmond, VA, and arriving in Myrtle Beach sometime on the afternoon of 12/13. I’m not sure when exactly I will be heading down your way because my brother may be flying in for a few days if he can get the time off. He would be coming in to Charleston, so I’ll kill 2 birds with one stone. But, I’ll be down until either just before or just after New Years.
First Lady liked this

That would be me! Assuming I continue to be complication free from my recent surgery, my 4-legged co-pilot and I will be departing CT on the morning of 12/12, breaking up the trip with a night at the historic Jefferson Hotel in Richmond, VA, and arriving in Myrtle Beach sometime on the afternoon of 12/13. I’m not sure when exactly I will be heading down your way because my brother may be flying in for a few days if he can get the time off. He would be coming in to Charleston, so I’ll kill 2 birds with one stone. But, I’ll be down until either just before or just after New Years.

#389633  by First Lady
November 11th, 2021, 10:09 pm
The great South Carolina club event started for Clarence and Stephanie early on Monday…about 3:30am as they began their trip south in the Suburban with Stealth M in tow in a beautiful enclosed trailer. Keith and I awaited their arrival on the front porch and while they took the baja trail, despite directions avoiding it, we were thrilled to have them arrive! We tried a new restaurant in the town of Summerville with a visit to the Sweet Tea for the must-have picture. Tuesday was dash swap day and I don’t think I’ve seen someone more excited than Clarence was. Planned to pull Stealth M into the garage to do the work but with 70 degrees and sun, they guys were more than happy to do it in the driveway. Stephanie and I monitored their work from chairs along slide. Lunch was a bit complicated to leap frog the car with no dash to pick up but for BBQ, we persevered. All in all, it took them 4.5 hours, including time to eat, to do the swap. The smile was priceless once the install was complete!! They did good work! We spent the evening around the firepit chatting with Stealth M getting spoiled in the garage overnight! After placing a late-night dinner order for delivery, we were shocked to be notified it was bumped to delivery on Wednesday morning!! Who wants a roast beef sandwich for breakfast?! Thankfully, the NJ company brought a ‘real’ pizza with them as a treat for us and we enjoyed it greatly for a very late dinner. I’m pretty sure Zillow was already getting a search surge for homes from Stephanie!!

Sure enough, Tuesday night’s dinner was delivered Wednesday morning during our pancake breakfast even after it had been canceled. The delivery girl had sooooo many bags for us – we may have over ordered! While Robert and Nick drove their way to Charleston 1.0 (that’s West Virginia), we found our way into Charleston to walk around and take in the sights. We walked the market where Clarence tried on some interesting headgear... ...down a quintessential street with large doors and gas lanterns to the waterfront. The pineapple fountain was an interesting sight with grown men doing maintenance on it! A late lunch/early dinner found us at our local sea food favorite where we completely overate!

While food comas set in early evening, we draped ourselves around the living room and ended up chatting until 2am – you know, childhood sleepover style!

Thursday arrived all too soon with delivering our over ordered food with our across the street neighbors (I left it in their fridge while they were at work!) and getting ourselves and Stealth M packed and on the road to Myrtle Beach. Not before Steph uprooted a section of our banana tree in hopes to take it back to NJ to grow in the greenhouse! Lunching at our favorite restaurant in the town of Summerville, we hit the road! A few hours later, between Luna and our three rides, we stormed Myrtle Beach and the Day’s new neighborhood. Dinner in Myrtle Beach was just so nice to all be together and long over-due hugs! Sweet tea for all my friends! As the first night together, we were bound to gather and while we couldn’t be outside (even though there was a perfect spot for us with lounge chairs and string lights) we supported Clarence giving Stealth M a warm garbage can wash (AKA – he filled the room’s trash can with warm water to wash the car with) by standing in the cold, we nestled into a table in the closed bar for bad wine #1, beers, and laughs! The only major casualty of the night, Clarence’s trash can that was forgotten downstairs!

Michael left Friday morning before any of us were up and we each found entertainment and stories to tell. Stealth M experienced hot laps on the track in Darlington – awesome videos and pictures!! 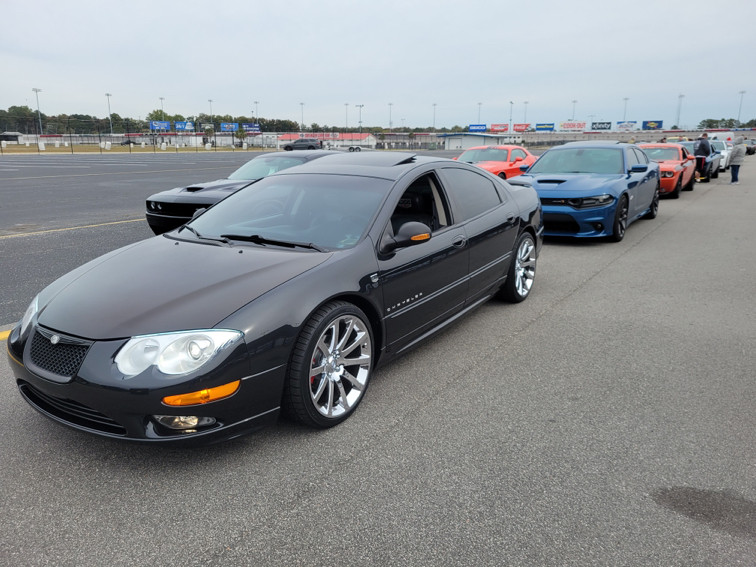 Robert and Nick explored the beach, an upside down building, and the boardwalk. We convened at the Day’s for a BBQ, crashed by the super fun neighbor who later saved the day with providing tents for the rain on Saturday…that we couldn’t actually use due to the gale-force winds!! There was sooo much food, it’s like we barley touched it. The pasta salad seamed to be autogenerating in the bowl! Thank goodness for a large comfy couch where we stretched out – literally practicing for Thanksgiving! Late night we found ourselves at our table in the hotel bar where Clarence was supplied with a MUCH larger than room sized trashcan to replace the lost one. Saturday started with a stop at Duck Donuts and meeting up to drive into the event together – yes it was cold and raining!! Super easy entry and well organized, we parked together and huddled in cars even though we were already soaked and cold. Unfortunately, the event ended up being much smaller than as planned due to the weather but we had a great time. Some really great cars to see and it was fun sharing ours of course. 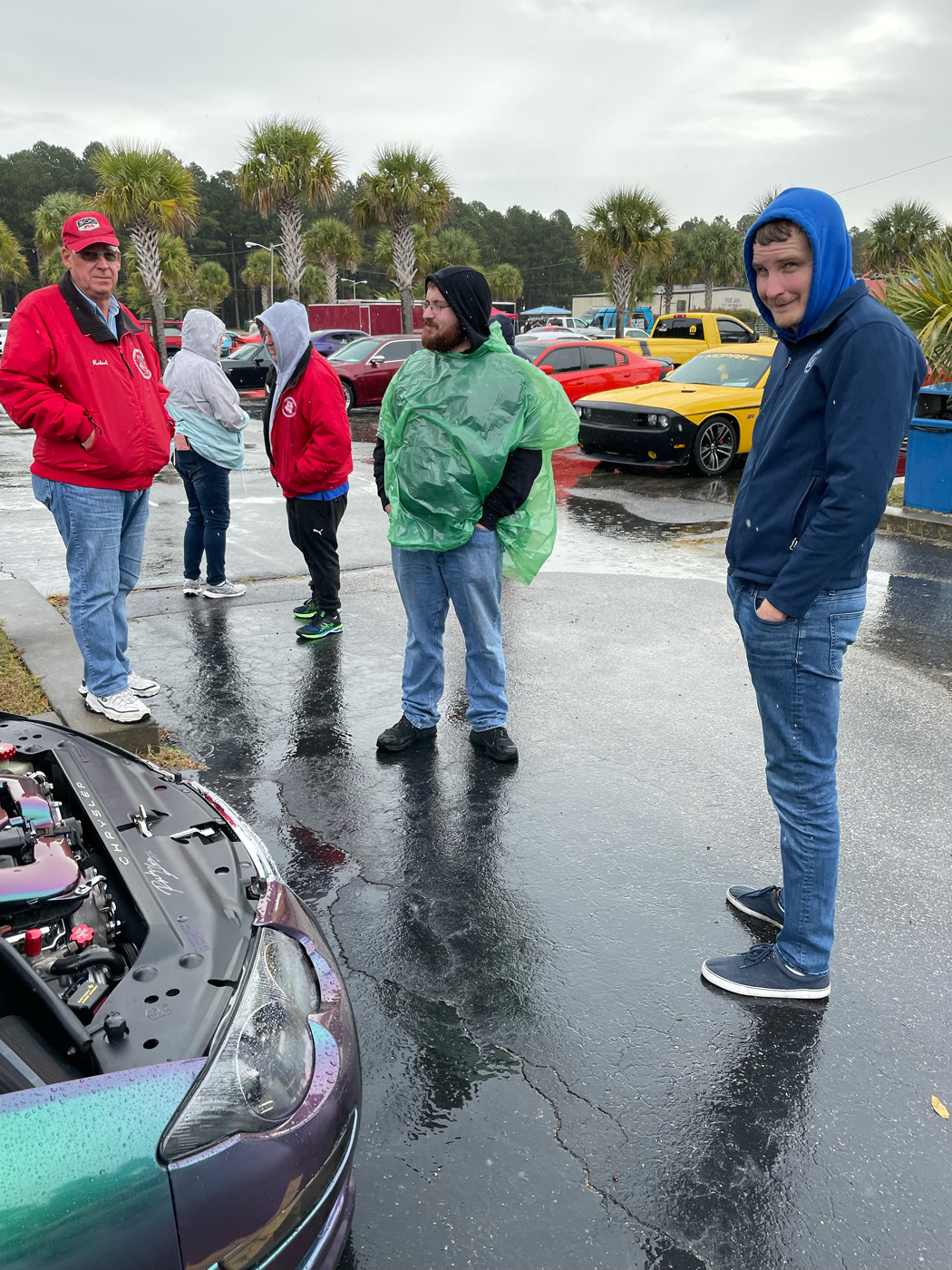 The judges were a group of students from a local technical school and they took great care in viewing each car in attendance – even in the driving rain! Raffle prizes were won by Darlene (a Chevy t-shirt for Bob not the lighthouse she was hoping for!) and Stephanie and shared with Michael – don’t let that awesome ‘big boy’ chair leave your trunk! Even with tons of water on most of the cars while the last few frantically dried theirs, The Legend as he was called by a fellow show participant and M-Pressive follower, Keith took home Best Paint and Top Pick from a Sponsor while Robert, Bob, Clarence, and I were recognized as part of the top 40 cars of the show. I also won a tint package in the silent auction which will be installed soon (whoo!!)!!

We were thankful to dry off at a group dinner and some delicious beer. Following dinner and returning to the hotel, we were greeted with some live sounds…errr music I mean, which passer-byes made hilarious comments about! The front desk staff wonderfully shared a separate conference room with us to shield us and we enjoyed bad wine #2 and more beers.

There was no way anyone was waking up early on Sunday – amazingly Michael made it back on the road all too soon to head back home. Next year, plan an extra day off!! With our daily stop to Duck Donuts...

...we headed over to the Day’s for more pasta salad like a herd of turtles. Stealth M got tucked back into her travel hauler and brought back to the cul da sac. 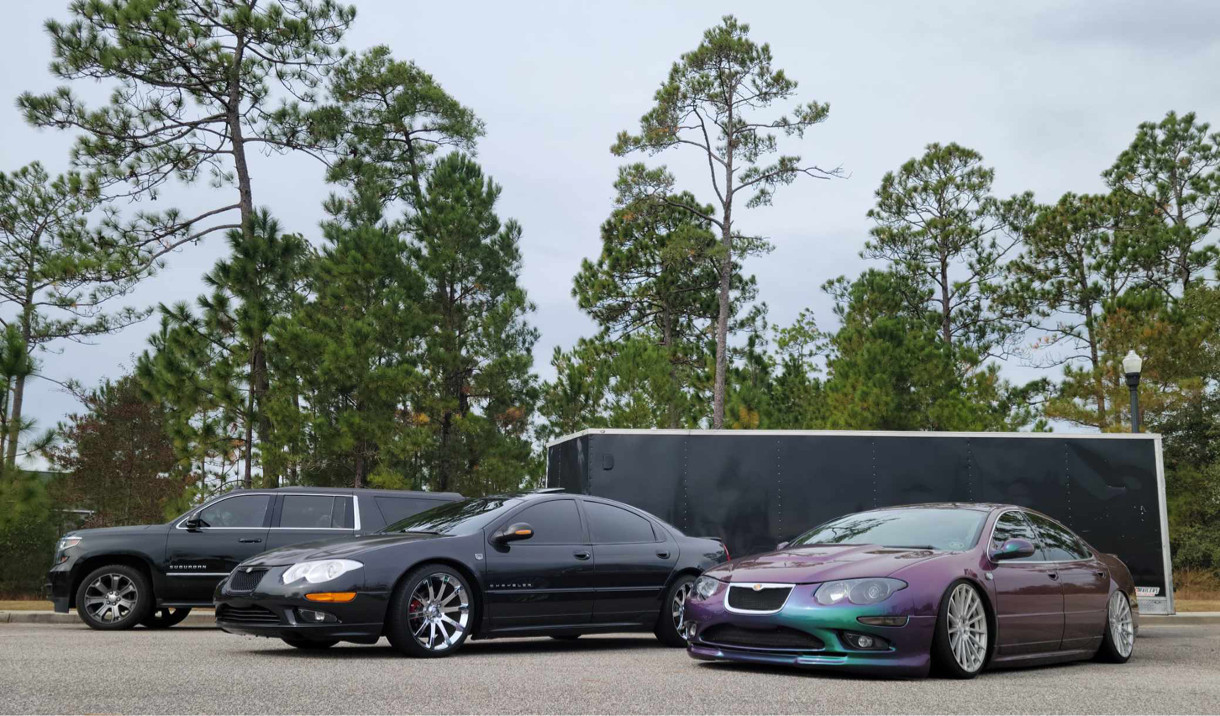 Thankfully, we were at least swapping the MI guests for the NJ guests and Robert and Nick came back to Summerville with us.

Sunday night we hung a bit at the house before sending them off to their hotel and a great adventure in Charleston on Monday while we figured out how to work again – work, it was painful on Monday while Stephanie and Clarence had a slow-going trip back home to NJ!!! Robert and Nick had an AWESOME day in Charleston walking around seeing what they could see, taking a carriage tour, and snapping some great pictures! We met for dinner at a great dive where we enjoyed a fabulous duck sandwich and burgers on the patio with craft beer- under the perfect crescent moon! 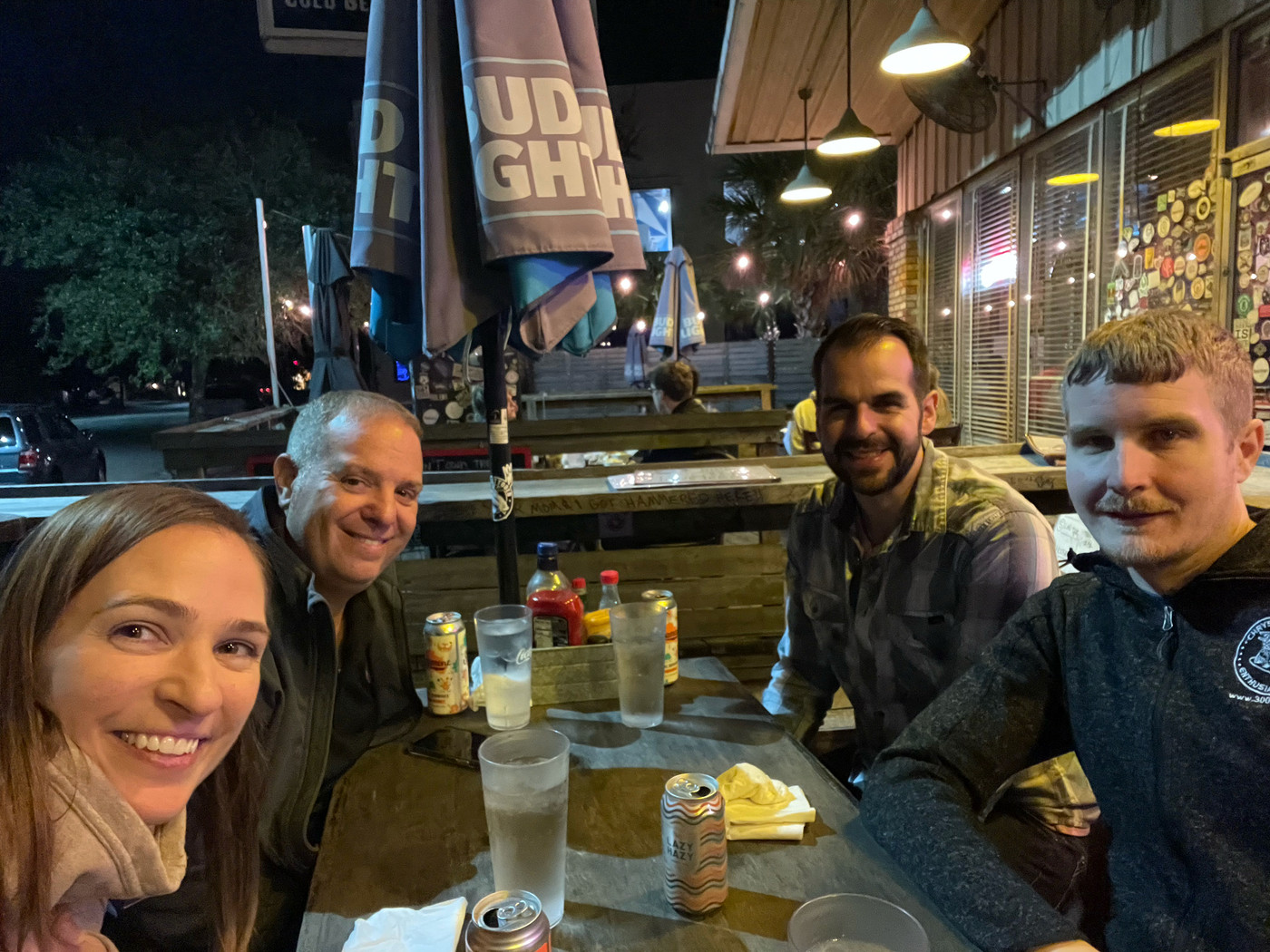 Tuesday Robert and Nick took a schooner tour of the Charleston harbor, seeing dolphins, and not a cloud in the sky! Luckily, I think they were smitten by the area…enough to have some job alerts turned on to see what opportunities might lie ahead! Out in Summerville we dined back at our favorite restaurant, had to take our Sweet Tea picture, and lounging back at the house. As always, regardless to where we are, how long it’s been, or what we’re doing, I’m always amazed at how a beat is never skipped, the laughs just continue to get longer, and shenanigans better! I so much enjoy catching up with this family and love our adventures together!! Thank you Stephanie, Clarence, Robert, Nick, Bod, Darlene, Michael, and Keith for a wonderful time!!! 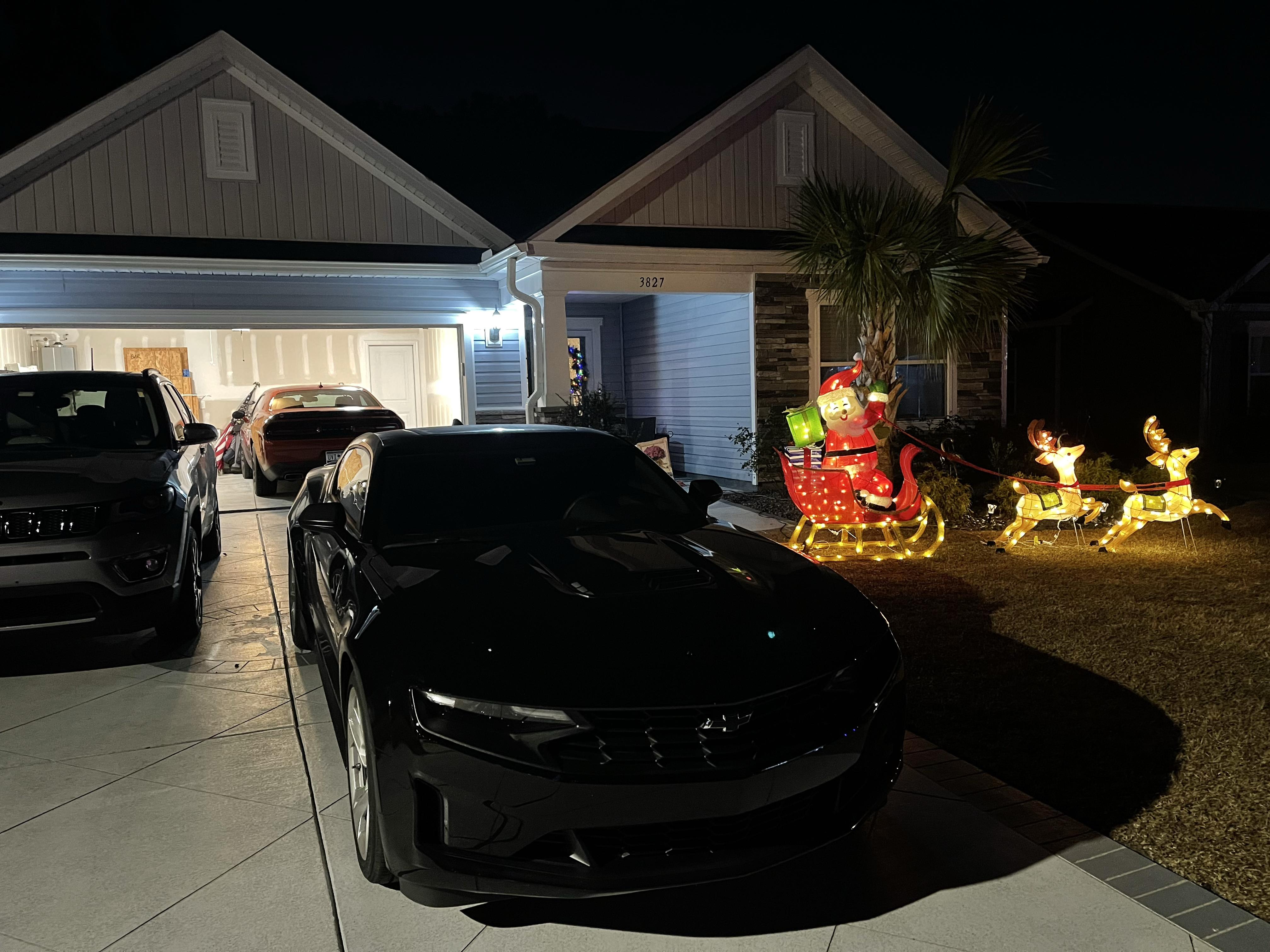