by FIREM
A little history of Carlisle, I will add a little something weekly as we prepare for our presence for the 17th consecutive year, Celebrating the 20th anniversary of the 300M.
Did you know there were only 5 cars present the first year the club attended?
Signboard tradition started first meet. 4 base cars, 1 Special
Any guesses who owned the 02 Silver Special?

by FIREM
How about the Official Carlisle Events T-shirt for 2002? by LUNAT1C
The things I'd do to have one of those shirts...

by EasyRider300M
maybe you should make a large display at carlisle of all the past shirts that are available and noting which years they are for ...and another display of pictures of past carlisle meets including group shots with notation of years...also a descriptive poster showing the history of our club

The silver special of course is our President's 2002 M
The black M, noting the plate, appears to be John Wyche's car, ...John passed away too soon in 2012..

by Sneke_Eyez
Wow someone else from MA (other than Keith of course) with the maroon M!

by FIREM
Likely the most Unique Exhaust ever from 02 Seriously! I wonder if Carlisle Events archives their old t-shirt images. Maybe we can beg them to press a few of those T's for us. I know....wishful thinking....

Seriously! I wonder if Carlisle Events archives their old t-shirt images. Maybe we can beg them to press a few of those T's for us. I know....wishful thinking....

We spoke to them last year about it and they've been through a number of venders since then and only have rights to certain images. Unfortunately, ours is not one of them.

by FIREM
I was unable to identify the owner of the Special that year. 2 former presidents, Robert Powell & Ken Eyler, John Wyche and Chuck Carleton were the pioneers of our presence at Carlisle for 2002.

For 2003 attendance grew tremendously. About a dozen M's along with a dozen or so other LH's made the trip.
Meets were now called " Rendezvous" (a meeting at an agreed time and place) as the club became family. 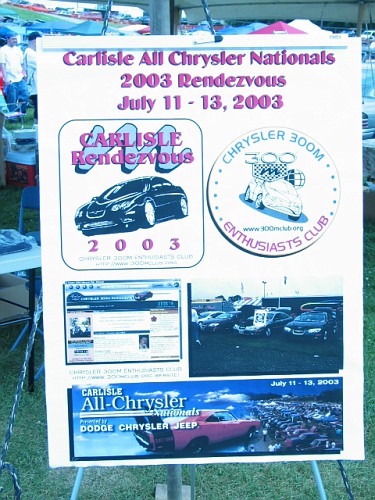 Club Awards were presented to members as "mods" were now a popular way of personalizing ones ride. 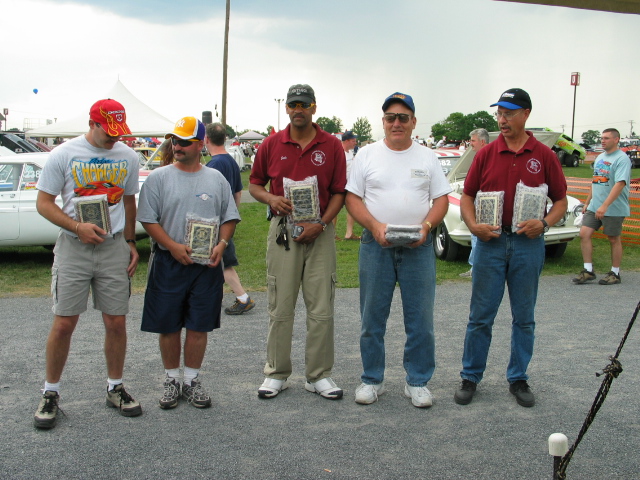 Performance Enhancements, Dyno Testing, & Drag Racing were in vogue along with cosmetic touches.
One guy from Mass showed off his Silver Special with mesh grill along with 3 pages of Mods ! (we know this guy!) On the performance side Don Scruggs was a drag racing enthusiast, prepping his car on the Dyno @ Carlisle
Claimed to be " Worlds Quickest Naturally Aspirated LH 1/4 mile ever!" 14.341 sec @ 95.06 MPH The "Show Stopper" had to be George & Jackie Deane's 2001 300M MZILLA http://mzilla.us/
This has to be one of the most highly modified 300M's in existence. Both cosmetic and performance this car was done to a level beyond anything seen to date. This was truly a 300 Letter car as the HP was well north of 300!! I was unable to locate actual track runs for the car but the end goal was to get the car into the 12 second category. Rumor has it that the car is still around in NJ but little has been heard since 2006 from the web site.
Carlisle Events still did not have us figured out. There was not yet a class for the 300M so we were lumped in with the "Front Wheel Drive 96-Current" cars. Yet quickly establishing a presence by sweeping the class! For the first time and ever since there have been 3 300M's recognized and awarded by Carlisle Events. by LUNAT1C
That year was just before my first Chrysler Nationals visit. 2004, I made my first trip out there from Flemington in my 2000 Intrepid SE and parked it in the road between rows, since the LH class was overloaded with Intrepids and Concordes! My very first trip to any Carlisle event was with my father in 2001 to Corvettes at Carlisle. He'd leased a 2001 C5 droptop the previous fall, so he had the bug to go see more of them (also had a '68 Stingray droptop parked in the garage beside the C5... miss that car!).

by FIREM
By 2004 Carlisle had become an annual event that was growing bigger than imagined. Drag racing on Friday night was still the thing to do. The Showfield gathering of not only 300Ms but also Intrepids and all LH cars quickly over ran our allotted space. The enthusiasm of the LH Community was evident to the folks at Carlisle and the beginnings of the "food plan" were started as we shared a large tent with others. Club Swag became available and was quite popular. Showfield Fixin and parking lot shenanigans started to happen as a way to help each other out. And of course Mods, Mods, Mods!
The first "Bagged" M made its debut and one of the most practical and unique mods was well received. How great to have a working fridge in the trunk ! Some familiar faces started to become regular attendees that carry on the tradition to today. Obviously awards and recognition were well established and appreciated by all. Carlisle Events took us seriously and the 300M had it's own class and winners attended the parade.
Some (myself included) only went to the event for the Saturday show. Those that spent the weekend managed to get a great picture on Sunday morning. What a great way to end the weekend. by LUNAT1C
04 and 05, I only showed up for Saturday as well. 04 I showed up in my "borrowed" 2000 Cinnamon Glaze Intrepid SE (borrowed for about 6 months from the fleet at my dad's company since they weren't doing anything with it). I had intended to take my 2001 DSB Intrepid ES in 2005, but sadly totaled it and had my Grand Prix by then. Showed up for the day with my dad. 2006 I started staying at the hotel.

by FIREM
By 2005 it was clear to the club that Carlisle was a big deal and a must attend if you could. Many of the "traditions" of today that are just appear to be natural occurrence started this year.
Topics and discussions started happening in January for an event in July. We would officially plan ahead !
Drag Racing was still a Friday night tradition to kick off some friendly competition.
20 cars were preregistered for the event well in advance with a goal of exceeding 25 to qualify for a large tent.
The "Meal Plan" as we know it today was officially organized with members pre paying for a weekend of food and refreshment at a reasonable cost. Over 60 people participated and consumed mass quantities of food.
Hotel Accommodations were also pre planned in harmony with the Dodge Intrepid folks who also participated in the food plan. This led took to parking lot fixin, cleaning & shenanigans to a whole new level.
Sleep became "optional" at meets.
The tradition of "Drunkey Drunk" phone calls to members not present was instituted.
The Saturday night group dinner was organized at "the Country Oven" as more members brought significant others, children, even pets to the event. Our family grew tremendously.
Showfield competition grew as everyone shined up and or showed off their unique mods.
A team of judges from each group inspected and rated each others cars. (DI judged the M's, M's judged the Intrepids) As expected awards were well earned.
Wild Mods from Suicide Doors on "Treppin" To Lambo Doors on Trevors M by EasyRider300M
Drone footage over Carlisle Chrysler showfield in 2015.

by Sneke_Eyez
Cool video, Steve.
Nice that they were right over the LHs there at the beginning.
All times are UTC-05:00
Page 1 of 1
Powered by phpBB® Forum Software © phpBB Limited