#386340  by LUNAT1C
November 6th, 2020, 4:08 pm
I've already made an announcement in the "what did you do to your car today" thread, but as time goes on I'd like to document our latest vehicular acquisition.

Since global affairs took a dive earlier this year and limiting travel became a great idea for everyone, we started wondering how we might reshape our future vacations and travel in such a way as to limit our exposure, and see things we haven't seen before. Some thing we'd like to do is visit Michigan's upper peninsula, visit national parks out west and down south, visit Appalachia, and have longer visits to one of our favorite cities, Key West. Perusing YouTube, we found that a lot of people have taken to using towable RV's to allow them to see so many parts of the US in the comfort of their own private accommodations, while simultaneously reducing exposure to other people and dropping large amounts of cash on hotels. We've never done it before, but the pandemic planted the seed and it has flourished.

We looked for a while at super lightweight towables. Our must-haves are a dry bath, aircon, heater, and enough space for us plus a couch or dinette of some kind. The issue we were running into is weight. To get all we wanted, it was possible to stay within the factory tow limit of my Wrangler, however my Wrangler is not factory. I've upfitted it for off-roading and exploratory forest and trail riding, which has increased the curb weight by at least several hundred pounds. So, the 3500 tow limit is now greatly reduced and a lot of RVs are out of range for it. We thought about getting a roof rack and rooftop tent, but then we'd be at the mercy of shower/toilet facilities at truckstops and campgrounds. Not exactly the private experience we want.

Our other SUV, the Renegade, certainly was not up to the task of towing anything more than a small utility trailer.

The Renegade itself was a fine vehicle, but the 5 year old Italian SUV was starting to show why Italian vehicles aren't desirable long term. So, we decide to replace it with a vehicle that can tow.

What to choose? Most people tow with a pickup truck. Problem with those, is 1500-series trucks are expensive, and we'd never use half the vehicle, having no use for a truck bed more than once a year if we need to haul 4x8 sheets home, and home centers offer truck rentals for that purpose. So buying a $60-70k Ram didn't make sense (same for a Silverado, Sierra, or F-150 with the equipment we wanted). Tahoe's are exorbitantly expensive. The Toyota Sequoia and 4Runner tow more than my Jeep, but Toyotas are far too chintzy.

That left the W-series twins. Grand Cherokee and Durango. Equipped with the Pentastar, they're rated for 6200 lbs, but reviewers said it's "enough" if you don't need to go uphill. The Hemi is rated for 7400 and laughs at 5000lb RV loads. We had rented a GC once back when we had Journey's and the ride was very nice, and we had no use for 3rd row seating, so we looked for one with a Hemi and tow package. 1st, we found tow package Hemi GCs are unicorns. Worse, many states require a trailer brake controller when towing more than 3,000 pounds, and the GC isn't offered with a factory controller like the Durango is. Aftermarket ones can be had, but we're not interested in making extensive modifications. So, we started looking for Durango's, and found the prices on them to be more palatable. However, finding a Hemi Durango with tow package IV AND a brake controller? Hah! Good luck. I found three used ones and two new ones in our area in a 150 mile search (which goes as far as Akron, OH and Grand Rapids, MI). One of them turned out to be just up the road from us at the Dodge store of the dealer chain that I ordered my Wrangler from in 2016. So, we ventured up there to test drive it.

We came to find that this particular unit was being sold as demo with right at 7000 miles on the odometer. The owner of the dealership (the guy whose name is on the door of every store in the chain) had used it as his personal demo car while snowbirding in Marco Island FL this past winter. It was loaded with nearly every option available except the 2nd row console armest and rear seat DVD system. Test drive showed that it would indeed be a great tow vehicle, with the gobs of torque I remember from my old Charger R/T.

We went back the following Saturday and looked again. Turns out, the vehicle was built July 2019, and was stuck on Marco Island during the initial lockdown this year. It didn't get back up to Michigan until late Spring, at which point it sat in the show room for a few months before they took it outside to try to get it sold. The owner of the dealer also had it modified. The wheels were sent up to the body shop at the Jeep store to be powder coated the same color as the car, and the factory stripe package was customized so the liftgate sections wrapped around the lower lip rather than stopping just before the lip, making a continuous dual stripe effect.

We talked numbers, had some issues with the salesman and sales manager that necessitated a conversation with the general manager (the guy directly below the owner in the hierarchy), and got them to agree to fix some panel alignment issues that would have resulted in paint damage over time, and replace the radio that had a deep gouge in the screen, and took delivery on 10/29/20.

PXL_20201029_180817876.jpg
PXL_20201029_180828959.jpg
Since acquisition, I've only made the typical minor additions to help keep it in good shape. I got a set of 1st and 2nd row Mopar all-weather mats, and a full set of R/T-GT style wheel well rocker guards from ZL1 Addons. Front guards are on now, rears need to wait until I have the time to raise the back end and take of the rear wheels. I will also soon need to get new wheel nuts, since FCA still uses the same 2-piece garbage from the 90s that swells after a couple of years. I've replaced those on every Chrysler Group/FCA vehicle I've had beginning with my Special. My Charger had two swell that needed to be cut off when I replaced the factory tires at 28,000 miles.

Other than that, I'm not going to be modding it much. It's our joint vehicle for Nick to get to work, and to take on road trips, with or without an RV. I'm looking for an R/T emblem to install in the grille in place of the Dodge emblem, and once the tires wear out we'll consider if we want to keep the white wheels. That's about it for now.
You do not have the required permissions to view the files attached to this post.
EasyRider300M, monte4, Legenbas liked this

#386397  by LUNAT1C
November 9th, 2020, 9:43 pm
Spent yesterday afternoon washing it, detailing the wheels, installing the rock guards, and giving it a cost of Meguiar's Liquid Ceramic Wax, plus Chemical Guys Wheel Coat. I still need to wipe out down inside and hit the dash with 303, and seats with a leather conditioner, and undercoat it with Fluid Film, but it should be good for Winter. Next spring I'll have more time to do a full decon and waxing. 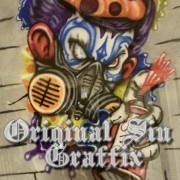 #387495  by LUNAT1C
March 8th, 2021, 12:14 pm
As the weather report starts to show numbers higher than teens and 20s and 30s, I'm starting to review my detailing product collection. The time is coming to get more chemical decon, a new "clay towel" I want to try that doesn't mar nearly as much as traditional synthetic clays, and some Graphene protection products to try (303 offers a spray that is good for a few months, and Turtle Wax just released a new hybrid ceramic and graphene paste wax that shines and slicks the paint like some waxes that cost $300+, for less than $40) on the R/T and the Jeep.

When we bought it I barely had enough good weather to so much as wash it and put on one coat of Meguiar's Hybrid Ceramic Liquid wax, which is only good for a few months. Time for the full new car prep (dealer's scratch-n-swirl prep is not the same thing). Thorough foaming and hand wash, chemical decon, mechanical decon, polish (possibly compound, not sure yet), and 2-3 coats of these waxes. Trouble with pure white cars... the iron deposits shout at you!

Yesterday it finally got its new license plate. The "JEEPLET" plate from the Renegade wasn't quite as fitting on a 3-row full size Hemi crossover... so now it has the Michigan standard white plate with blue accent to match the Durango, and "SPEDWGN". We also sprung for the annual state park pass, so we'll take the Durango whenever we go on trips that involve state parks.
monte4 liked this

#389108  by LUNAT1C
September 20th, 2021, 10:51 am
I'll have to get a picture this week, can't now since Nick has a few shifts and I'm in the office. Saturday I finally set aside the time and found the energy to get around to detailing the Durango. Fully cleaned the wheels, tires, wheel wells, and used my new MTM foam cannon to foam the exterior. Then gave it a good mechanical wash, including using a detail brush around the rear windows and fuel door where my wash mitt doesn't get to. Followed this with liberal use of Meguiar's Iron Decon, which revealed quite of bit of iron deposits in the rear end and around the wheels, as expected.

Then, I used my Meguiar's professional line mild clay to clay bar the entire car, particularly the rockers, behind the wheels, and the fascia. Then some targeted polishing with M205 took care of some blemishes in the paint that white cars tend to be prone to.

Once done, the paint was the cleanest it's ever been. I took out my new jar of Turtle Wax hybrid Ceramic paste wax infused with graphene technology and rubbed it over every spec of paint, vinyl stripe, and glass I could get to, and made Nick put a fresh coat of CG Max Coat Wheel wax on the wheels. Planning to use up that jar before I try wheel waxes from Blackfire and McKees 37 (Blackfire formula looks strikingly similar to Ammo's Wheel Gelee).

A few touch-ups later with the Mopar touch-up paint, and it cleans up well. Still need to detail the interior again, but that should be a simple vacuum and 303 application.

No major issues. Just a slight noise when the RPM drops through 1400-1200. I turned off the aircon and found the noise goes away at that point, which tells me it occurs when the compressor puts stress on the serpentine belt and must be related to tension of the belt. Assuming it's the belt or the tensioner. I'm going to let the dealer take care of it since it's still well within our extended warranty and tensioners are not cheap.
monte4 liked this