I have never done this before

Yes some people clean their engine, some don't. You know who you are.

I have never done this before

#144754  by ezgoing2406
August 25th, 2007, 11:49 pm
Ok I never cleaned any car engine I have ever owned. What is the best way to clean are engine without having any problems in the long run. I just want this to look like new again. And with this going to the body shop next month to be repainted why not get the engine clean first. All info would be great. thanks
Be Cool about LIfe

As for cleaning the engine, it depends on what level you want to take it to. Plan on having a lot of clean rags or cheap microfibers handy and find a nice engine dressing. CD2 works well if you can still find it. For the plastic under the hood, most any kind of vinyl or tire dressing should do the job, even Armor All (and I'm not usually a fan of that stuff outside of dressing my wheel wells.)
Dave

Someplace around here I still have pictures of what hail dents look like on 2-day old paint, LOL.
Dave

#144849  by Shadowvox6
August 27th, 2007, 10:51 am
Usually, I find that a good trip to the DIY car washes keep it clean for me.
I will keep the car running, and spray it off with some high pressure spray.
First with soap, then a rinse. If it is exceptionally dirty, I will hit it with some Simple Green. If it is really bad, I will get the heavy duty chemicals for Engine Cleaning....I had to do that with BluBallz when I got it, now a good regular spray will be sufficient.

I don't do this more than 3-4 times a year....usually once a quarter will suffice.

#144850  by EasyRider300M
August 27th, 2007, 11:10 am
Tom, are you protecting any areas of the engine form the water spray? I always was nervous about spaying the engine . When I have cleaned the engine, I just wipe it down with cleaner and a rag and then use tire shine.
Every Day's a New Adventure!

EasyRider300M wrote:Tom, are you protecting any areas of the engine form the water spray? I always was nervous about spaying the engine . When I have cleaned the engine, I just wipe it down with cleaner and a rag and then use tire shine.

Nope...
I just spray it...
As long as the motor is running, and you take it out and drive it afterwards...it is ok.
Or at least, that has been my experience.

EasyRider300M wrote:...I always was nervous about spaying the engine . When I have cleaned the engine, I just wipe it down with cleaner and a rag and then use tire shine.

FWIW - there are two areas that would concern me:
(1) Brake booster - the push rod that actuates the master cylinder from the booster is *very* prone to *heavy* scale rusting. My guess is that under normal conditions, it would not rust, but if you spray the engine compartment indescriminately, water gets into the unsealed but otherwise captive area of inteface between the booster and master cylinder. When I replaced my booster, and saw that push rod, I seriusly wondered how it did not buckle from the seriously reduced diameter that had been converted to scale rust.
(2) Shifter cable - If you compare the original design to the new one, the old one is designed such that water would be directed into and trapped between the sheath and the cable. New one is sealed against that happening. Again - I wonder if those of us who had problems had them because we or a previous owner washed the engine down (rather than moisture getting in there from normal usage). Not sure when the new cable design made it into production vehicles.

I also would worry about direct spray into the alternator.

Anyway, not to toot my own horn or anything, but I didn't really remove anything so I think it came out pretty damn good for having just done what my little hands could reach.

I bought Royal Purple industrial strength degreaser, microfiber towels and if I were you, i'd add latex gloves in. I learned this one the hard way. I was afraid if I powerwashed or even just used a regular water hose water would find its way into something, so everything was done by hand. I used the degreaser several times over everything because the engine bay had never been cleaned before me(97k miles). After that, I used water with different towels. As for the "shiny" manifold, I actually used Meguiar's leather wipes. In my experience it never dried anything out, and I also used them on the mirrors too. It all looked great. After that, once a week i'd get a bucket of water and a couple clean towels and just go over everything for about an hour or two.

Bill Putney wrote:Good job, Lisa! I envy you guys who do that. Unfortunately I work in a mining area - it's a losing battle for me to do that sort of thing.


Yeah, living in a very dusty city never helps either. I'm sure I would have only done it once every two weeks or so if I wasn't surrounded by dirt.

#144885  by Shadowvox6
August 27th, 2007, 1:44 pm
With the weatherpak style of connectors we have under the hood of our cars, getting them wet isn't a big deal. These style of connectors resist water. They are a sealed connection. Won't damage them, or compromise the electrical connection within them.

As far as getting items wet, you try to avoid direct spray on the alternator, or an open coned filter, but instead you concentrate on the block. The alternator can handle getting wet though, they have to be designed to handle working under the hood, where water, and moisture is a constant risk.

As long as the car is running, there isn't usually an issue. 3-4 minutes of spray on the block won't hurt. With coolant circulating through the block, it won't crack.

I have been doing this to cars for years, and trust me...I haven't had an issue. Not since I have sprayed an engine with a bad distributor cap, and killed the car have I had an issue!! 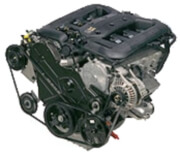 shadowvox6 wrote: As long as the car is running, there isn't usually an issue. 3-4 minutes of spray on the block won't hurt. With coolant circulating through the block, it won't crack.