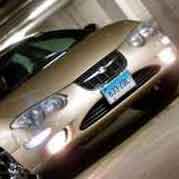 #345331  by Chrysler1924
May 7th, 2015, 5:18 pm
While trying to re-assemble the first of my set of Special mirrors, I somehow managed to break the plastic cover that snaps over the motor assembly behind the glass, covering the motor.

This happened while I was trying to snap the glass back in place on the mount. I'm going to have to research another way of getting the glass on, but in the interim I need to get another plastic mirror motor cover.

Aside from the obvious differences such as a turn-signal, the mirrors are also larger in size than the 1999-2000 mirrors.

I'm wondering if I could re-use a motor cover off my old set of mirrors and if it would work properly. Or... am I stuck waiting to find another set of Special mirrors to cannibalize a mirror motor cover from.
Member #2210 | 2015 Chrysler 200S | 2019 Harley-Davidson Road King Special
Formerly, Solomon - The Allpar 300M | 2000 Chrysler 300M

Re: Side Mirror Motor Cover | Interchangeable?